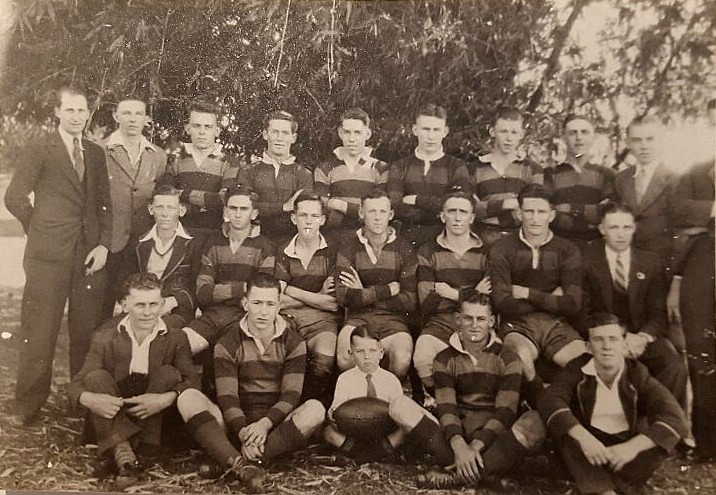 Every family has at least one event that has achieved almost legendary status over time, perhaps an amount of notoriety. One such occasion occurred in September 1953 when South Lismore Rugby League Club’s First and Reserve Grade teams won their respective Minor and Major Premierships.[1] Stories about the tries, the extra time, the drought between premierships and even the ‘victory party’ at my grandparents’ house became the stuff of legends.

Rugby league was an incredibly important part of the social and sporting fabric of life in 1950s Australia. This was particularly true of country towns. Suburbs were tribal, inter-town rivalry was fierce and whole families were incredibly loyal to “their” team.

It is no surprise that Allan Harris, my grandfather, was a life long supporter of South Lismore. His was the fourth generation of the Harris family to live in South Lismore over a 100 year period. The first was the pioneer William Harris who is recorded as living on Tunstal Station (South Lismore) as early as 1850.[2] His active participation in the club stretched from playing for the club in the 1920s to his role as an official in the 1950s. Given that level of involvement, I can only imagine his elation following South’s clean sweep of the premierships.

Newspaper articles from Trove, as well as a family heirloom, are emblematic of that time.

A search for “Souths Rugby” and using the filters “Northern Star’, ‘1953’, ‘August’ and “September’ resulted in a number of articles, most of them written by “Norcoast‘ about the teams and their triumphs. [3] I even found an article about that controversial extra time (and was surprised at the gentlemanly way it was resolved). [4]

One article confirmed my understanding that my grandfather Allan Harris, a fierce Souths’ supporter, was a club official/ treasurer at the time of the premierships.[5] However, it was one relatively small article, ‘Free Blazers For Players’ that really caught my eye. [6]

One of my father’s prized possessions was a framed blazer pocket.The article provided me with the background to this family heirloom. The pocket was from one of the set of blazers mentioned in the article, all four hundred pounds worth. That was a large amount of money in 1953, particularly for a club in a country town.

This is a real indicator that the austerity that marked the years following World War 2 was coming to an end as these were the first full team blazers issued after the war.

I have to wonder what my fiscally very cautious grandfather really thought about the very healthy bank balance that he helped to build as treasurer being spent on blazers. I suspect that he secretly really liked it as one of his favourite sayings was “There’s no good being poor and looking poor”.